Welcome, new members! This guide will, hopefully, serve to answer all most of your questions.

The whole server is overseen by the Speaker of the House. They're the owner of the server, and the person who makes most official announcements. Moderation power, and the power to preside over sessions of Parliament, is jointly held by both the Speaker and the Deputy Speakers. Finally, there is an Advisory Council, which can enact changes to how the server functions. The Council and Deputy Speakers are both democratically elected,[0]admittedly, the Council also has seats reserved for party leaders and the Speaker and the staff team as a whole is referred to as The Speakership.

What's happened since we started

XOMBP diverged from reality on March 17th, 2019. Since then, many changes have occurred in the law and political landscape. You can find a lot of documentation in the legislation archive or our master spreadsheet, but here's a rundown of the major differences:

Conservative and Unionist Party, the

Labour Party, and the

You can also stand as an independent, or, if you manage to get three other people[1]Or just one other person if it's a regional party! to join you, and convince the Speakership you're significantly different from other parties, start your own party!

Every 4—6 months or so, a general election is held to determine the seats in the House of Commons. For about a week, candidates and parties campaign their arses off, all while our magical election spreadsheet™ determines who wins based on activity in Parliament, campaigning strength, scandals, and local issues. The final seats are allocated via the mixed-member proportional method, explained in this handy image: 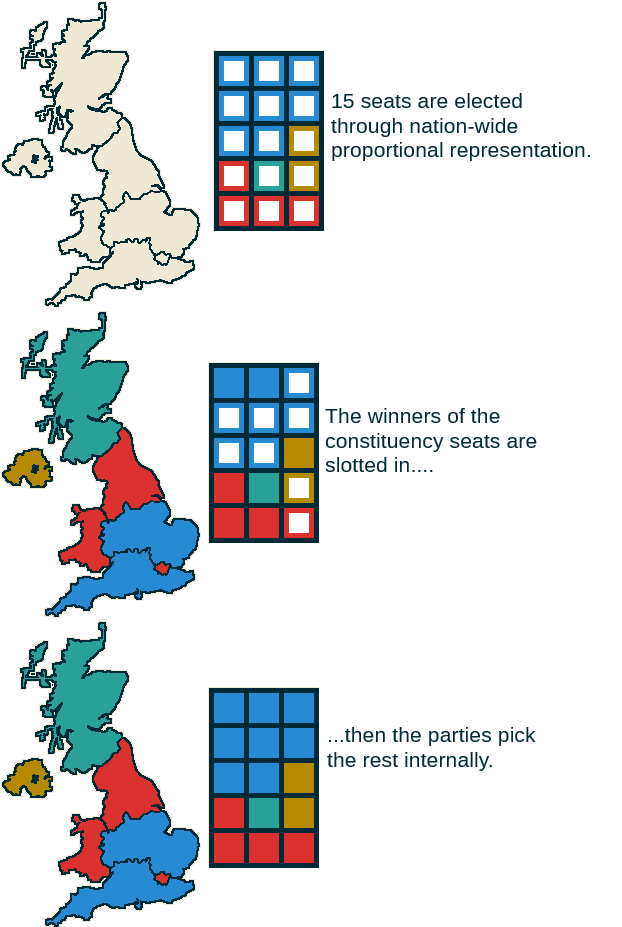 Legislation comes in 3 categories: bills, motions, and amendments. The purpose and standard format of said categories are laid out below. How this legislation goes through parliament is covered in separate guide.

Bills, known as Acts if they are passed, are the main method of effecting change. If passed, they will become part of the law of the country, so please, for the love of $DEITY, take your time when writing them. The standard format for bills is as such:

A Bill to have all cats killed.


Be it enacted by the Queen's most Excellent Majesty, by and with the advice and consent of the Lords Spiritual and Temporal, and Commons, in this present Parliament assembled, and by the authority of the same, as follows:—

Bills not conforming to this format will be rejected.

Motions can be used for things like motions of no confidence, calling general elections, and establishing committees, but the most common type is simply one of the Houses of Parliament urging the government to take action on an issue. The standard format for these motions is as follows:

Amendments are submitted during the legislative process of a bill, and, like the name suggests, are used to amend a bill. Amendments may not go against the principles set out in the bill's long title; those that do are known as "wrecking amendments". The standard format for amendments is as such:

An amendment to the Cool Cat Bill 2019

This amendment was written by the Rt. Hon. Lord of Nowhere KCB MBE, on behalf of Her Majesty's Most Loyal Government.

Ministers' Questions aren't legislation as such, but they are a valuable feature of parliament. Every Wednesday, the Prime Minister has to answer questions in the House of Commons; on other weekdays, other ministers are forced to answer.

Speeches in the House of Commons are adressed to the Speaker of the House; other MPs may not be referred to by name. The standard format to referring to MPs is:

Speeches to the House of Lords are instead adressed to the whole house. Example speeches include:

In addition, one cannot accuse another member of lying or deliberately misleading the house.